The history of the Château des Aiguilles
The Château des Aiguilles is a former defence fort, probably erected during the 14th century and made a fief during the 16th century.
Its origin is unknown until it becomes successively property of :
. Alain Thermes, keeper of the royal seal in 1518
. The Count of Oradour d’Authezas
. Gilbert de Pons in 1560
. Antoine de Rochemure in 1720
. Louis de Rochemure who inherited from his father
. Marie-Gabrielle de Chalier in 1775, she was the wife of Joseph Moreau, Lord of Perthus
. Marc Trizon, tax collector of the Chapter of Brioude in 1790
and from then on there is no more information available until the 1800’s

Some bits of history :
. Jean Hippolyte de Vergeses, painter (1847-1896), owned the castle but divided it up selling the meadows, the shed and the barn
. Then the castle was sold to the Duche family who had already purchased the lands of the Property
. The daughter, Cécile, inherited from her parents.

And since…… the book of origins stands open and the quest continues…..
. 2011, Sophie and Eric purchase the Castle. They do want to carry on the maintenance and the restoration of the Castle and they wish to offer magnificent host rooms. 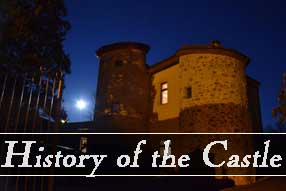